How to stack images for nightscapes and milky way - PART 1

Do you like nightscapes!? I think so... Seriously who doesn't like these fabulous shots of the milky way, standing beautifully on top of a great subject?!
Every time we stare at one of those jaw-dropping images, we ask ourself how is it possible to create such clean shots, noise-free subjects and sky, while shooting at high ISOs. Do we need an high-end camera? Do we have to spend many many euros for new gear?

This is the first of two articles, in which I will show you how it is possible to produce great shots, even with a basic setup and non-expensive gear, working only on an accurate planning and on using the right tools for post production. I will explain the basic principles, and in the second part I will explain how to use "Sequator", a great new tool for image stacking.

I do not want to lie to you: good equipment always helps a lot, this is true.. but it is not mandatory at all, believe me! Of course, using basic camera and lenses will require you to spend more time in post production.

The recipe is this:
* Think before shooting: ETTR technique
* Take multiple shots
* Use specific tools: Sequator (a great alternative to DeepSky Stacker)

First of all, I really have to tell you all the obvious things you probably already read in many other tutorial (yes... I really have to do this, because otherwise the discussion won't be complete).
Let's start from the first thing many beginners (and not only) ask: the equipment.

Theoretically, a Full Frame sensor has better performance in low light conditions. This is due to the physical dimension of every single pixel.
But honestly, in practical situations the difference is always smaller, day after day (there are many reasons, for example the general higher resolution of the FF camera, but also the great quality of APS-C sensors).
Read the second part of this article for a practical test (Sony A6000 vs Sony A7R2).

What kind of lens?

I suggest you to get a wide angle lens. First, because the composition of a nghtscape is way more beautiful with a wide angle (because of the great attention driven to the starry sky). Second, because of the rule of 400 (read on for more details).
The faster, the better: if you can, try and choose a f/2.8 lens. f/4 is still ok, but do not go higher with f numbers (again because of the rule of 400).
If you already have a lens that meets my suggestions, go on with it. But if you plan to buy a dedicated lens, I really suggest you to look forward the great Samyang 14mm f/2.8 (here the Canon and Nikon version): for less than 300 bucks this lens is really sharp, has a very very low coma aberration, and works really well for nightscapes. Here my first review.
For all the ones interested in which lens I currently use, my choice is Venus Laowa 15mm f/2 D-Dreamer (a more expensive lens, but faster, sharper, with filter thread, etc...)

When you want to take a shot of a night sky, there is a limit on the shutter speed you can set, above which the stars will not be pins anymore (they will appear as small trails).
The calculation of this exposure limit is quite complex (there is a NPF rule that takes into account many parameters, including pixel density of your camera, etc), but usually there is a very easy formula that helps in many cases: take 400 and divide it by the focal lenght of your lens. The result is the maximum shutter speed to avoid trails.
As a consequence, a wide angle lens is better than a telephoto one, because you can use longer shutter speeds before experiencing trails.
Notes: the rule was once know as "rule of 600", then "rule of 500", etc... This is because, due to the extreme resolution of modern CCDs, the previous values are not correct anymore.

It depends on the camera you have. With Sony cameras, it is very easy, because you can zoom on a star, and focus perfectly in live view. I tested the same technique with Nikon, and it was not possible (because I was unable to spot single stars in live view mode, everything was dark). Probably the same applies on Canon too.
So... how to do it? Here a simple trick: disable AF on your camera (quite obvious). Take with you a torch, put it around 20m away from the camera, and then turn it on. Go back to the camera, and focus on it (if you are paranoid, you can fix the focus ring with a piece of tape). Now you can compose your image.

We have the shutter speed (from the rule of 400); how to calculate the correct exposure? I'll try and give you the fast recipe (and then I'll try to explain why)
* set your maximum aperture (e.g. f/2.8)
* set the shutter speed you calculated with the rule of 400
* set ISO to 1600. Of course this value depends on the light pollution of the environment. But just to start
* take the first shot, and analyze the histogram.
* Now, raise your ISOs, and take another shot. Go on rising ISOs until the histogram of the picture will be totally shifted to the right (but without clipping, of course!) 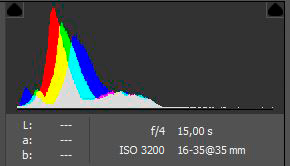 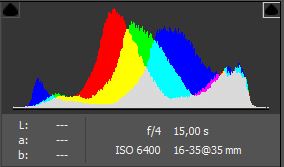 Keep into account that, following the ETTR rule, will produce a shot that,** at first sight**, will be very ugly... overexposed and with no contrast at all. But believe me: all you have to do is to open your raw file (Do you shoot in raw, don't you!? eheh) and lower the exposure... All the beauty will be back, and with an extremely low noise!!

This is what we call "Expose To The Right" (or ETTR) technique: to keep your histogram shifted on the right.

The reason why to over-expose increasing ISOs is quite long, and requires a lot of time to explain all the (boring) details. So, let's make a deal: believe me, and I will save you a lot of time. It is way better to increase ISOs and then lower the exposure in Lightroom, instead of taking a "correctly exposed" shot. This is because of the signal/noise ratio... and when you lower the exposure in post, most of the grain due to the noise will disappear.
(if you really are interested in understanding the whole thing, go here and satisfy your curiosity)

When you got the first image following the ETTR technique, take 10/15 shots more! It is really important to do that, and we will understand why in the next article.
After that, take 3/4 dark frames: a dark frame is an image taken with all the same settings, but with lens cap on. It will be used by dedicated software to "remove" the residual noise.

In this article I tried to give you some basic (but really important!) tips for taking great nightscapes and milky way shots. You really have to consider the above principles as the basis, you really can't do without them.
There are many more tricks that could be used, I will tell some of them in the next part; I will also cover in deep how to use Sequator software, in order to stack many shots together, to end up with a great noise-free image.

Stacking Images For Nightscapes Part2Photography Gear In My Backpack